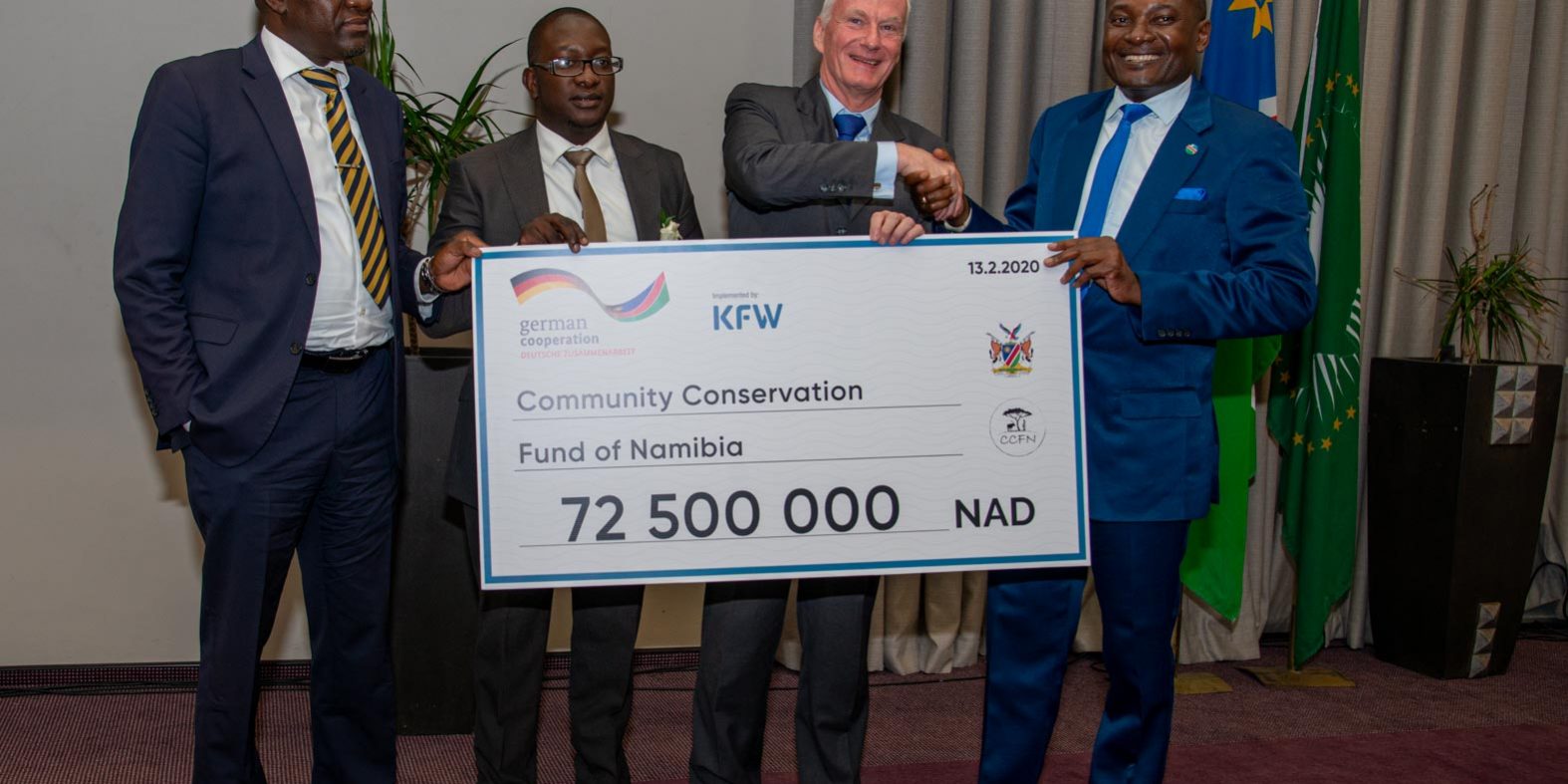 The Community Conservation Fund of Namibia (CCFN), which will help take the country’s flagship natural resources conservation programme to the next level, has been launched.

The creation of the CCFN will reduce the Community Based Natural Resources Management (CBNRM) sector’s dependence on external funding support, taking into account Namibia’s designation as a Medium Income Country.

The Fund has been established as a sustainable funding mechanism to ease the problem of limited funding and create a sustainable finance framework for a collection of important long-term support services to conservancies and community forests.  Funding windows of the CCFN would be the Minimum Support Packages (MSP), which aims to provide critical support services throughout the lifespan of the individual conservancies, the Payments for Eco-Systems, which would reward custodians who take care of the environment, as well as the Human Wildlife Conflict, which promotes sustainable co-existence between humans and wildlife.

In his overview of the operations of the CCFN, the organisation’s CEO, Mr Tapiwa Makiwa emphasised the importance to capitalize the CCFN Endowment Fund from all sources.He added that this creates the much needed basis of a readily available pot of funds that can be wisely invested and used according to the needs of the programme into perpetuity.

He further noted that the CCFN had equipped itself with not only a sound Investment Strategy, but also a team of expertise from local and international investment firms that would ensure that the Fund is a success.

The Namibian Government, through the Ministry of Environment, Forestry & Tourism (MEFT), CCFN and other partners also committed various contributions to the project, to ensure that it’s a success.

The MEFT Minister, Hon. Pohamba Shifeta, who officially launched CCFN, said the Fund creates an enabling platform, which enables Namibians to collectively bring together resources and contribute to their own cause and invest in the future generations.

“I would also like to challenge the local Namibian population and corporates to play their part in these common endeavours. A well-balanced eco-system coupled with rural development is a benefit to all Namibians,” he urged.

Additionally, he appealed to various potential contributors to follow the example set by the German government in supporting the CCFN, its work and the conservation drive of Namibia.

The German Ambassador to Namibia H.E Herbert Beck said Namibia is one of the leading countries in Africa when it comes to the management of its natural resources to benefit the people.

“While it is a pleasure to take the lead in supporting this new funding instrument of the CCFN, it is evident that more money is needed in order to ensure the long-term sustainability of the fund and the programs it supports. I, therefore take this opportunity today to encourage other bilateral and multilateral partners as well as the private sector to invest in Namibia´s Community Conservation by supporting the CCFN,” the Ambassador Beck said.

The HWC project is expected to run for four years and the targeted beneficiaries are the registered communal conservancies mainly in central, west, east and northern Namibia, Kyaramacan Association and their members, who are negatively impacted by HWC caused by key species such as lions, elephants, hyenas, wild dogs and crocodiles.

The total number of conservancies is expected to reach a ceiling of approximately 90-100 within the next 3-4 years, while more of the currently registered conservancies are reaching levels of financial sustainability as their wildlife populations recover and partnerships with private sector prosper.