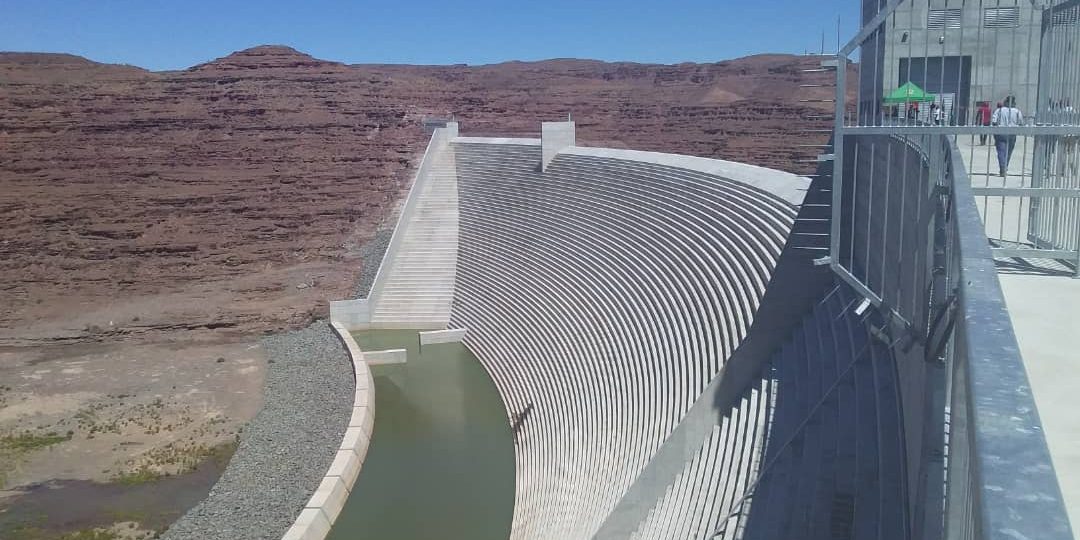 One of the largest capital projects to have been undertaken in independent Namibia, the Neckartal Dam constructed at a cost of N$5, 5 billion, has been successfully completed and was officially inaugurated by Vice President H.E Nangolo Mbumba on 13 March 2020, during month of Namibia’s 30th independence anniversary.

The Neckartal Dam is located on the Fish River in the //Kharas Region and is the first phase of the mega Neckartal Irrigation Scheme. It will harness water from the Fish River and will have the capacity to hold up to 857 million m3 (eight-hundred-and fifty-seven million cubic meters) of water.The water will be used in the irrigation of 5000 hectares (ha) of land for agricultural development. Some of the water will also be used for electricity generation in the dry region.

Construction of the dam commenced on 11 September 2013 and all civil works were completed in September 2019. It was officially handed over to the Ministry of Agriculture, Water and Land Reform(MAWLR)on 25 September 2019.

The Neckartal Dam, the largest in Namibia, is an engineering marvel, which features state of the art technology and has been designed to be environmentally friendly. The dam will stretch more than 38 kilometres upstream and has a circumference, at full supply level, of more than 290 kilometers.

The concept of the Neckartal Dam was first conceived during the colonial era. However, it was only after Namibia attained its independence in 1990 that further discussions to realise this noble dream to take place. Following feasibility studies by the MAWLR, cabinet approved the implementation of the Neckartal Dam Project, and on 14 August 2013, the tender awarded to an Italian company, Salini Impregilo S.p.A for the construction of the dam.

Vice President Mbumba said, the completion of the dam project was a result of perseverance and determination by all those involved in this vital national project, geared to bring massive economic benefit to the people of the //Kharas region and Namibia at large.

“The focus of the government has always been to increase access to water for human and animal consumption, as well as for agricultural purposes. Furthermore, our aim is to ensure that there are sufficient water reserves for industrialisation, land servicing and housing development purposes as outlined in Vision 2030, National Development Plans (NDP) 4 and 5, as well as the Harambee Prosperity Plan.

“The importance of this engineering marvel is not to be found in its display of concrete and engineering excellence, but rather the essence of this dam ought to be seen in the bigger scheme of things, that of enabling and being a catalyst for water security. A catalyst of food security, sport and recreation, energy generation, research and development, industrialisation and job creation,” the Vice President   said.

The primary purpose of the Neckartal Dam is to impound the fresh flood waters that flow in the Fish River during the rainy season. Such water will be used for the irrigation project where lucerne, table grapes, dates and other cash crops or fruits as well as vegetables will be cultivated.  The dam is envisaged to have other secondary benefits for tourism and water sports. This will directly contribute immensely jobs creation and stimulate economic growth in Keetmanshoop and surrounding areas, as well as contributing to water security, food self-sufficiency and nutrition security for the //Kharas region in particular and the country at large.

In addition, Neckartal will generate an estimated 3,5 Mega Watts (MW) of hydropower per hour, which will be fed into the national power grid.

During the construction phase of the mega dam, a total of 3,000 Namibians were directly employed on the site, while an estimated 2,500 indirect jobs were created in Keetmanshoop and the surrounding areas, of which 65% emanated from the //Karas region.

Suitable irrigation land was found on commercial farms downstream of the dam construction site and the 5,000 ha of irrigation land will be purchased and registered soon with the Deed’s Office.

“When the 5,000 ha of land has been put under irrigation, we envisage to create around 4,000 direct and indirect jobs. Once the irrigation scheme is under full production, the farmers in the region may take advantage of the protein enriched lucerne pellets and fodder produced at the plant on-site in order, to improve their animal condition for better market prices,” Vice President Mbumba said.

The water needs of drought-stricken settlements in the surrounding areas, as far as Grunau and Aus, will also be taken care of by the new dam.

“I urge various stakeholders to come and invest and make full use of this new dam, by investing into the various agricultural opportunities that exist, in order to reap the full benefits of what the Neckartal Dam has to offer,” the Vice President said in conclusion.