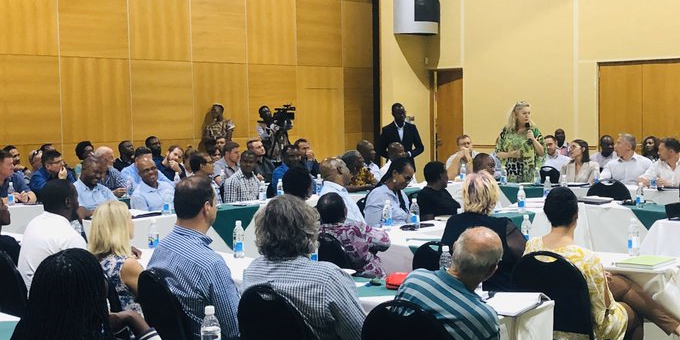 The Namibian government, through the Ministry of Industrialization and Trade (MIT), is collaborating with relevant stakeholders to develop a Namibian Poultry Industry Master Plan, aimed at improving the competitiveness of the industry. The new plan will include facilitating egg production, day old chicks, broiler production, as well as value added products.

Former Minister Tjekero Tweya and senior officials from MIT met with the poultry industry in March to address the challenges current challenges being faced by the industry, as well as map the way forward.

In a bid to allow the local industry to penetrate the Namibian poultry consumer market and to protect it against foreign dumping and unfair trade, MIT instituted a quantitative restriction on the importation of poultry products into Namibia in May 2013, through a Cabinet decision. The aim of the interim measure was to achieve the “Growth at Home” strategy aiming to upgrade, modernise and add value to raw materials.

The scheme initially made provision for the importation of a maximum of 600 tons of poultry products per month, which was further increased to a maximum of 900 tons per month on the 1st November 2013, and another increase to 1500 tons on 15th May 2015 respectively.

Subsequent to a consultative and re-evaluation process, a new measure repealing the interim referred to above was announced by MIT, and became effective as from 28 February 2020 through aGovernment Notice No. 7132/2020. This notice established a limit of 1200 tons of poultry products per month that may be imported into Namibia, subject to certain conditions and procedures stringent to support the local poultry production.

However, government concluded that devising a master plan that enhances the competitiveness of the local industry would be the more sustainable solution, to the challenges currently being faced by the Namibian poultry industry.

Hon. Tweya said, the master plan was a way to seize the opportunities that are presented by the poultry industry as well as addressing the challenges.

“The master plan is aimed at increasing local production, import substitution, poverty alleviation, job creating and improving living standard and, above all, contributing to food security.  In addition, it will also identify issues and challenges facing the poultry industry that led to the production gap between the different producers, and accordingly recommending mitigation measures to minimise such and grow the sector exponentially,” the former Minister said.

The plan will focus on five main pillars aimed at addressing the following:

The master plan will explore how the production can be maximised in order to meet the domestic demand as well as supplying export markets.

Various stakeholders have been identified for the development of the plan and they include MIT, Ministry of Finance, Ministry of Agriculture, Water &Land Reform as well as the Ministry of Urban and Rural Development. Poultry producers, importers, regulators, such as the Namibia Standards Institute (NSI),Namibian Competition Commission (NCC), Namibia Trade Forum (NTF), the Namibian Agricultural Trade Forum (NATF), MeatBoard, Namibia Industrial Development Agency (NIDA) and Namibia Agronomic Board (NAB) will also be involved in the crafting of the master plan.

Hon. Tweya said the Master Plan will be developed with emphasis on cascading and integrating the high level initiatives into workable programmes for the industry; as well as with consideration to regional, central and production for international markets.

The first task team meeting was held on 5 March 2020, and a study will be conducted to provide factual information to support the working groups of each of the five pillars identified during the meeting.

A deadline has been set for the master plan to be finalised within six months,and to be submitted to MIT no later than 30 September 2020. In essence, the terms of reference of thetask team is to develop the rules of procedure, monitoring prices (farm gate and retail), collecting statistics, identify a champion to ensure unity of vision and enforcement.