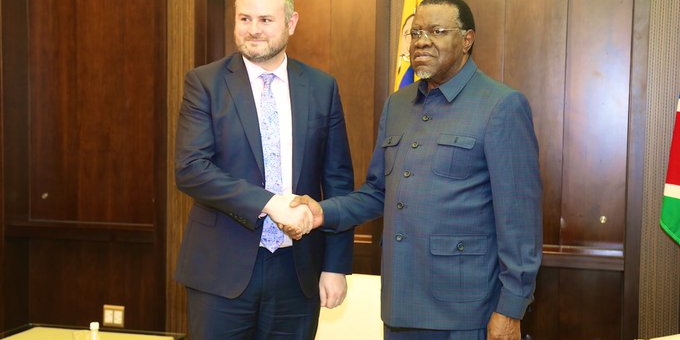 Britain’s Joint Minister of State at the Foreign and Commonwealth Office and the Department for International Development, Hon. Andrew Stephenson, paid a courtesy call on President Hage Geingob at the State House in January.

He assured the Namibian Head of State that Brexit will not stand in the way of cooperation and trade between the two countries, but rather presents Britain with an opportunity to develop its own trade policy and trade programmes.

The United Kingdom (UK) recently signed an Economic Partnership Agreement (EPA) with the Southern African Customs Union (SACU), for which Namibia is part off, and Mozambique, jointly referred to as “SACU+M states”.

The biggest impact of this EPA to Namibia will be for the agricultural sector through, which the exporting of beef, dates and grapes to the UK market will continue freely after Brexit.

This EPA is the first of several steps the UK is taking as part of its commitment to growing African trade.

The EPA makes it possible for Namibian businesses to trade much as they do now, without any additional barriers or tariffs. It eliminates tariffs and quotas on all goods imported from Botswana, Eswatini, Lesotho, Mozambique and Namibia into the UK, as well as on products covering around 96% of goods imported from South Africa.

Economist Klaus Schade commented that the rollover of the EPA between SACU+M and the UK after Brexit was certainly good news, since it removes uncertainties regarding the trade framework after the UK left the EU.