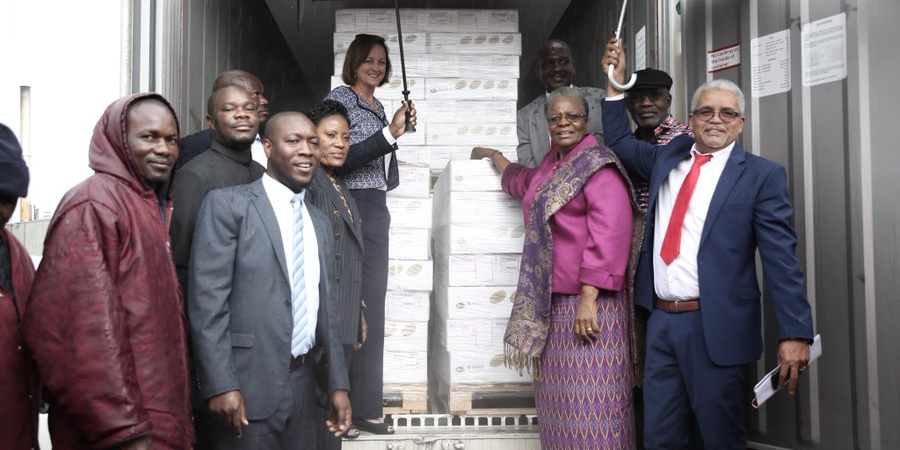 In 2002 and in 2005, the Namibian Government initiated negotiations on the export of meat (beef) products to the USA, with the intention to export boneless (not ground) raw beef products such as primal cuts, chuck, blade, and beef trimming.

This breakthrough, courtesy of Meatco’s high-quality beef, has made Namibia the first country in Africa eligible to export beef to the USA and will also see the country benefit from the duty-free export of beef into the USA through the African Growth and Opportunity Act (AGOA).

Deputy Prime Minister and Minister of International Relations and Corporation, Hon. Netumbo Nandi-Ndaitwah described the milestone as one of the longest protocols ever that the Food Safety and Inspection Service (FSIS) of USA and the Namibian Directorate of Veterinary Service (DVS) had undertaken to ensure that all technical areas are cleared and are in accordance with various established protocols.

Hon. Nandi-Ndaitwah said export of beef to the USA signified how ties between Namibia and America continue to be strengthened through different bilateral agreements.

“I must say, Namibian farmers are talented and creative people. They go through so much to produce the best beef in the world amidst harsh climatic conditions. I am truly proud and respect every Namibian farmer. I also thank Meatco for their highly specialised skills in processing one of the best quality beef in the world,” said Hon. Nandi-Ndaitwah.

The Deputy PM said Meatco was an important contributor to the national policy of “Growth at Home Strategy” under MITSMED.

“Meatco avails its exceptional export quality beef cuts to international, as well as local outlets. Primal cuts such as rump, fillet, strip loin, silverside and topside are available to Namibians in accordance with export quality standards. Meatco’s main target in the USA is the ever health conscious consumer who increasingly focuses on eating organic foods such as the Namibian beef, and this group is ever increasing,” she said.

Meatco also entered the Chinese market recently and over 3 000 tonnes of meat have already been exported to China.

“To move forward requires our collective determination and action to ensure that team Namibia and the agriculture industry plays the trade game on the same side, in a coordinated manner and determined to win. I therefore call on all role players, the producers, government officials, Meatco and the media to take the friendly hands of our clients in Africa, Europe, China, America and of other countries around the world that allow or will allow us the opportunity to bring Namibian beef, which we are all so proud of, to their kitchen tables and restaurants,” further explained Hon. Nandi-Ndaitwah.

After undergoing several audits, health and safety protocols since Namibia became eligible in 2016, the consignment dispatched to the USA was the first official commercial consignment.  This follows various samples that were sent to the USA for various laboratory tests to ensure all safety aspects were adhered to.

“Under the final approval agreements, Meatco will be exporting boneless raw beef products like primal cuts and beef trimmings as well as chuck and blade.   The approval will enable Meatco to send 860 tonnes in the first year and by the fifth year, Namibia will be able to send up to 5 700 tonnes per year,” Meatco said in official communication.

The consignment, which left Namibia via the Walvis Bay port, was expected to enter USA via the Philadelphia port.

Namibia’s livestock industry is worth approximately N$3,9 billion annually, according to Meat Board 2019 statistics, with Meatco’s share standing at around 50%.

“Meatco has managed to stabilise producer prices over the past few years and continues to maintain a relatively competitive price compared to other regional and international beef-producing countries, such as, Botswana, Brazil and Argentina, which have the same nett export status and serve similar international markets,” the corporation said.

Meatco was audited at plant level by the United States Department of Agriculture (USDA) Food Safety and Inspection Service (FSIS) and was found fully compliant. This inspection was conducted under the inspectorate, which is responsible for the commercial supply of meat, correct labelling and packaging in that country.

To date, only 33 countries worldwide have been approved to export meat to the USA.

Chief Marketing Officer at the Meat Board of Namibia, Mr Desmond Cloete, acknowledged the importance of Meatco’s market entry into the USA,highlighting that this development would set Namibia apart from other competitors like Botswana and Lesotho that also export beef to the EU and Norway.

“Namibia is the first country in Africa to export beef to the USA and this sets us apart. Our world renowned traceability system NAMLITS and FANMEAT scheme put trading partners at ease that the beef exported to their countries are safe and animals from, which it is sourced are raised naturally and were never treated with antibiotics, growth stimulants or any other biotechnology,” said Mr Cloete.