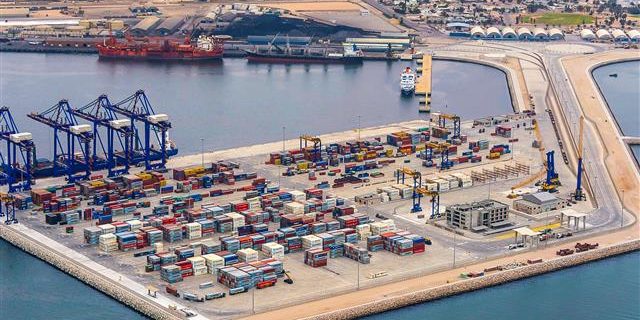 Namibia’s flagship Ports, the port of Walvis Bay and the port of Lüderitz are both on an upward trajectory path, having recorded significant milestone that have put Namport on a solid footing.

At the port of Walvis Bay, Namibia Ports Authority (Namport) new container terminal, which has been in operation for about six months, has recorded the highest productivity in a decade clocking a rate of 36 moves per hour.

Previously the container terminal recorded an average of 26 moves per hour. Namport highlighted that this milestone is made more special by the fact that their operations team only had about 6 weeks training on Ship-to-Shore (STS) cranes before commissioning instead of the mandatory 6 months training.

In order to further enhance productivity, Namport notes that it decided to join hands with all stakeholders involved at the terminal, both internal and external, and instituted a Productivity Improvement Project (PIP).

“Stakeholders meet on a regular basis at the terminal to address any issues that may hamper productivity and give recommendations to mitigate these issues. This platform also assists with various training aspects identified, such as skills shortages and plans to fill these gaps,” Mr Immanuel Tino! Hanabeb, Executive for Commercial at Namport, said.

He also said that Namport has been receiving enquiries from potential clients who are eager to move their business through the terminal.

“This is a positive sign not only for Namport but also for Namibia economically. Between the period of August to December 2019, the port has moved 69 166 twenty-foot equivalent (TEU), while in 2020 a total of 15 927 TEUs have been moved thus far,” Mr !Hanabeb said adding that the terminal has not seen full capacity as of yet.

With the current global economic state, the terminal has not been operating at full capacity. However, the port has seen positive changes in terms of volume at the especially from August to November. Namport is aware that there are other players along the west coast, and what happens at other ports affects the Namibian ports as well.

“A notable achievement for the country is Meatco and Namport’s first beef export to the USA through the port of Walvis Bay. This makes Namibia the first eligible African country for this opportunity. Meatco will send 860 tonnes initially, which will be increased to 5 700 tonnes per year.

In recent times, the Trans Oranje Corridor route that links the port of Lüderitz, has experienced tremendous volume increment, and thus prospects of becoming a logistic hub are becoming noticeable, Kamupingene reiterated.

According to Kamupingene, the port’s current volume has increased from 600 000 tons per annum to more than 800 000 tons, and it is anticipated that this trend will continue.

Apart from the above, Debmarine Namibia’s operation is gradually relocating to the port of Lüderitz from Port Nolloth, South Africa, and as a result an escalation in terms of activities inside the port in comparison to the previous financial year is also noticeable.

The port has also recorded a significant increase in passenger vessel calls at the harbour town, which directly speaks to an increase in tourism activities.

“Local taxis and tour bus operators are also tapping into these opportunities by transporting tourists to heritage sites around the town, such as Kolmanskop and the ever popular Diaz Point.

We anticipate for a very good year through collaborations and synergy amongst all stakeholders within the logistics industry, in order for us to attain our ultimate goal of being a logistics hub in the SADC region and thus, we will be able to create more employment opportunities for the locals and in the same vein create niche industries,” Mr. Kamupingene further emphasised.

In the current financial year 2019/2020, the port of Lüderitz has so far received eight passenger vessels and is expecting eight more to call its port as opposed to only 10 vessels that called the same port in the previous financial year 2018/2019.

MSC South Africa Managing Director, Mr Ross Volk, expressed his excitement with the announcement that MSC cruise ships will be visiting the port of Walvis Bay and port of Lüderitz on a more regular basis in the next season from the port of Cape Town.