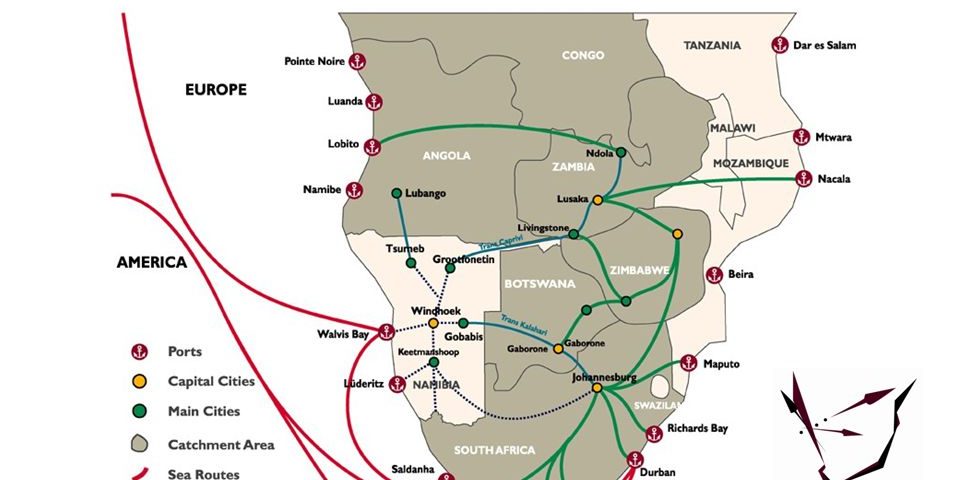 The Walvis Bay Corridor Group (WBCG) celebrates 20 years of existence this year, as the group continues on its journey to develop Namibia as a gateway for trade in the Southern African Development Community (SADC).

Since its inception in 2000 the WBCG has focussed on growing cargo volumes on the Walvis Bay corridors, which include the TransKalahari Corridor, the Walvis-Bay-Ndola-Lubumbashi Development Corridor, the Trans-Cunene Corridor and the Trans-Oranje Corridor.

The Trans Kalahari Corridor links the Port of Walvis Bay to Botswana’s capital, Gaborone, and the heartland of South Africa’s industrial province, Gauteng. The Walvis Bay-Ndola-Lubumbashi Development Corridor provides the shortest route between the Namibian west coast ports of Lüderitz and Walvis Bay and the vital mining and agricultural areas in Zambia and Lubumbashi (in the southern DRC), as well as Zimbabwe and Malawi.

“We want to transform the corridors into hubs where value addition takes place and where other services, such as manufacturing, are offered along the corridors,” he said in an interview with the Journal.

“We want to include other modes of transportation in our service. We have been focusing on land and sea freight and not air transport. We also need to address the issue of warehousing as a way of adding value on the corridors,” Mr Tjivikua said.

Tapping into its strength as a Public Private Partnership (PPP), the WBCG is addressing some bottlenecks on the corridors in order to reduce delays and enable a smoother flow of cargo.

Over its 20-yearexistence, the WBCG has recorded a number of success stories.

“One of the breakthroughs that we made last year was to open up the Port of Lüderitz to the export of manganese from the Northern Cape and that has been a significant milestone. This has revived that corridor and more businesses in the Northern Cape want to shift the export of manganese to Lüderitz,” Mr Tjivikua said, adding that the limited capacity of the port remained the major drawback.

The Port of Lüderitz has seen a drastic increase in cargo activity. Due to this new commodity, it is expected that the port will handle up to 800 000 tonnes per annum. Lüderitz is further experiencing a significant increase in passenger vessels. The increase in demand for services at the port has opened up the opportunity to build a new and larger port at the southern harbour.

The completion of the new container terminal at Walvis Bay is also one of the major milestones that the WBCG says will contribute immensely to establishing Namibia as the regional logistics hub.

“This is a facility that will not only be utilised by Namibia but by the entire region and we believe it will bring us the volumes (of cargo) that we want and it enhances our vision. It has state of the art equipment and facilities and has the capacity to handle large cargo,” Mr Tjivikua said.

An increase in transit cargo into and from Zambia and the Democratic Republic of Congo (DRC)has been recorded in the last few years.

“This positive growth in volumes on the Walvis Bay-Ndola-Lubumbashi Development Corridor is a sign that our on-going efforts to promote Namibia as a viable trade route in the region continues to reach new customers. Business with the Zimbabwean market is also on an upwardtrajectory,” Mr Tjivikua observed.

The increased cargo volumes from Zambia and the DRC has, however, brought new challenges for the WBCG, as the Katima Mulilo border is not well equipped to handle the large volumes of trucks, resulting in congestion. The same is the case at the Kasumbalesa border between Zambia and DRC.

“There is a need for service to be improved on the corridors so that we do not delay cargo unnecessarily at border posts. We still have a way to go on this objective and we are persistently engaging the relevant stakeholders in order to achieve the goal of harmonised systems and procedures on our corridors,” the WBCG CEO said.

Being transit corridors which link into two or more countries, the WBCG has advocated for the establishment of trans-boundary Corridor ManagementSecretariats whose core function is to regulate and oversee the development and implementation of seamless cross-border trade, transport and passenger facilitation measures. These regional Corridor Facilitation Committees are established with the signing of Memorandum of Understanding (MOU) between the involved countries. The first successful secretariat established was the Trans Kalahari Corridor Secretariat (TKCS) in 2007.

In striving to achieve its gigantic mission, the WBCG is restricted by limited financial resources. Currently the group relies on limited funding from government, donor institutions and from its members.

“Funding has been a challenge for us, especially with respect to us setting up the logistics hub, which is one of the pillars of Namibia’s development plans. There’s no funding for that,” Mr Tjivikua acknowledged.

Going forward, the WBCG, which currently has a presence in Johannesburg (RSA), Lusaka (Zambia), Lubumbashi (DRC)and Sao Paolo (Brazil), is working on extending its footprint internationally. “We want to set up offices in Asia (China), Europe and the USA. To attain our goal of growing the volumes on the corridors, those markets need to be more aggressively engaged and pursued. Our presence there is crucial to securing business from those areas,” Mr Tjivikua said.